Wikipedia describes a lost film as "a feature or short film that is no longer known to exist in any studio archives, private collections or public archives such as the Library of Congress."

The further back in film history you go, the longer the list of lost films get.  For the most part, this is the result of studios failing to preserve anything made before the 1930s because these films were thought to have no commercial value (wrong!), or because the nitrate-film that was used for most movies before 1952 caused easy deterioration and/or spontaneous combustion.  The Martin Scorsese's Film Foundation estimates 90% of movies made in the silent film era to be officially lost!

While lost films are indeed common during the early age of cinema, the list gets shorter and shorter once you hit the 1950s.  By the 1970s, the list narrows to only about four films.  A modern lost film is as rare as a gold dust.

A 1999 production called Puppet was thought to have been the most recent lost film to date, and before that was Sam Raimi’s film debut entitled Clockwork in 1978.  Both have since been rediscovered.  However, there is one film called The Cornfield People that is believed to be filmed and completed between 1999 and 2001, and is currently considered the youngest lost film.

The few people who have heard of this movie—and the fewer who have claimed to have watched it—know it better for its incredibly gripping plot: the meaning of life and what comes after death.  Many maintain that the film doesn't exist and never did, given the lack of proof—even a lot of the old lost films have proof of existence through publicity stills, ticket stubs, theatre listings or copyright registration… but not The Cornfield People.

However, Joey L. Asap’s (Red Sands at Dawn and Buried with Leather Gloves) may have been the one at the helm of The Cornfield People.

Around late-1999, Asap was spotted with a small film crew in the Lake Stevens, WA, near the cornfields at the Carleton Farm.  Nothing ever came from this well-known citing, leading many to assume he was filming his unrealized fourth film… which is rumored the mysterious Cornfield People.

Asap's website had confirmed his fourth film's premise was to be based on a banned essay he wrote for Paranormal Pacific entitled “The Truth and No Room for Debate”.  Considering that Paranormal Pacific published a lot of articles that either riled people up or made the small press look bad, it has been long discussed what Asap’s essay could be about and why it was ultimately banned.  Many at www.joeylasap.org’s message board conclude that the controversy of Asap’s essay could easily be related to the meaning of life and what comes after death… the supposed plot of The Cornfield People!

If anyone has any more information about this supposed film, please reply to this blog or e-mail me at dant3p3rk1ns@gmail.com.

On 07/06/2014, author C. W. Schultz replied to this blog, which I originally wrote on 08/28/2013.  Apparently, he is writing a book about this film after coming across all the rumors circulating on the internet; and, in the process, has uncovered some pretty crazy stuff!

In the e-mail exchange we had, he did not provide me with a whole lot of details about his book or about the film itself.  However, he did provide an attachment that "should put an end to the debate of whether or not this film actually exists or is just a myth."  And so… the truth… 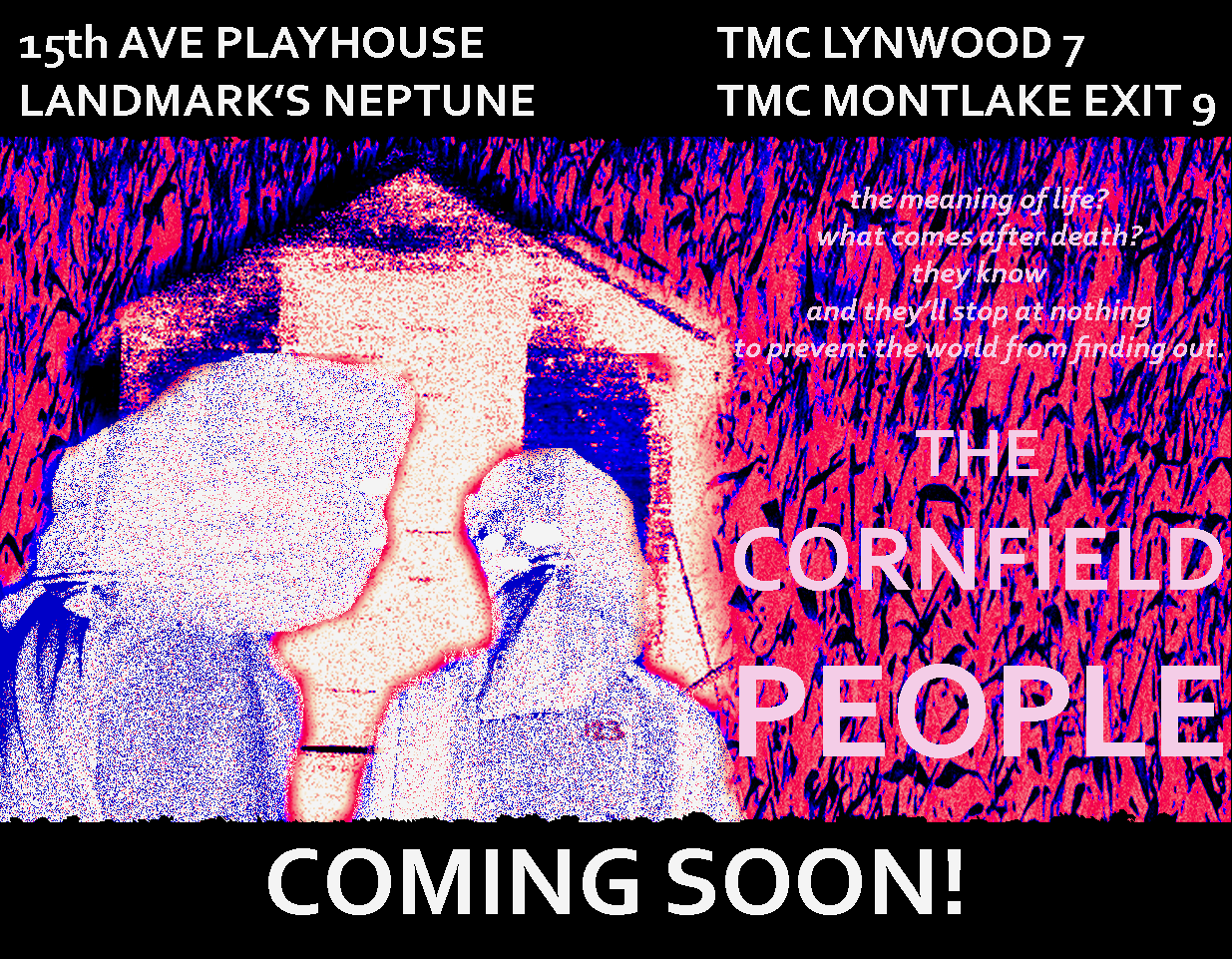 Schultz says the above image is an ad found in a Seattle P.I. from April 5, 2002 that he was able to retrieve through Google News Archives in December 2010 when he began working on this project a few months after submitting the final draft of his second novel The Pack to his publisher.

He explained that the blog I originally published in August 2013 covered some interesting facts and rumors that actually assisted him with piecing together the puzzle of his project, but that he has so much more to offer the world about The Cornfield People.

Schultz is exercising caution with the information he is providing me.  Originally, I thought this might be the work of a hoaxer because of how discreet he was being, but after I did some research and found that Schultz is indeed published author, I realized the provided information had at least some credibility.  So then I figured Schultz was just holding back on some info to prevent me from posting some juice on here for free that would drive sales away from his upcoming book.  However, after a couple of exchanges, Schultz has said that the reason for secrecy is that he tried to reach out to other bloggers and webmasters in the past with detailed information about The Cornfield People, but their blogs, message boards and/or websites have since been taken down.

Could it be that there is someone (or a group of people) out there who wants this film to be erased?  It sure it sounding like it.  But, if so, why?  Schultz said he will "cautiously" provide me with more details as he slowly pieces things together.

If you have any information, please shoot me an e-mail.  dant3p3rk1ns@gmail.com

An anonymous poster just requested I take The Cornfield People page down, saying there are no facts to back up the claims.

For one, Geekster On Movies is about opinion, not fact.  Two, I will not be censored.  And three, this post just feeds my curiosity even more.

Considering the information I have culled and the ad C. W. Schultz retrieved, it seems that the debate is pretty much at an end. The film does exist.  So how could this anonymous poster says there are no facts to back up my claims?  Furthermore, even if there wasn't, why would s/he care so much anyway?

The comment is now a new fascination of mine, as Schultz warned me I would begin to get pressured into taking anything related to The Cornfield People down.


Luckily for me, I've been given the heads up, unlike other sites that have discussed this film… and I will not be taken down.﻿

I honestly didn't think I'd be making so many updates to The Cornfield People out of the blue, but once C. W. Schultz got in contact with me, the interest and controversy had a snowball effect.  Just to give everyone a heads up, somebody (or somebodies) have been trying to remove information regarding the underground film The Cornfield People.  If this person or these people had been successful, Geekster On Movies would not be the first site taken down for discussing the film.

What's the big secret about this film?  Well, we can grasp based on the little information I have uncovered that the premise of this film involves a cult that knows the meaning of life and what comes after death, and will stop at nothing to keep this knowledge a secret.  Now, this just sounds like the plot of an interesting horror/thriller, right?  Well, perhaps there's a little more truth behind it, which is why the film was never released and why a certain person or group of people are hiding behind the internet while trying to delete The Cornfield People from existence.

Even though Schultz (who is writing a book about this film) has only posted here once, I have actually been in close contact with him regarding these strange posts on this blog.  More details to come, as Schultz has dug up a lot of dirt on this missing motion picture.

The only thing tougher than waiting for the answers is keeping these freaks from hacking my site.  Stay tuned.

Belated Holiday gift?  Just got an e-mail from someone who is willing to send me a copy of The Cornfield People.  While I trust C. W. Schultz (who is my main source of information involving this film), the fact that I get to watch this movie for myself gives me a newfound belief in the existence of  this film—after all, there are those who claim this movie is just a hoax.

Only time will tell if The Cornfield People is actually as crazy as its underground fame.  If all goes well, I shall see for myself.

Belated Valentines gift?  Do I have a secret admirer?  That’s up for debate… but one things for sure… The Cornfield People DOES exist!  I saw it with my own two eyes.  Yes, it was worth the wait.  See review here.

C. W. Schultz's A Book About a Film will be released on Tuesday, September 8th, 2015.  It sets out to prove the film’s authenticity and that there’s something more sinister behind its scarcity.  The book will include rare images of the unreleased film.

C. W. Schultz's account of The Cornfield People was released in A Book About a Film on September 8th, which is not only a novelization, but also an in-depth analysis of the movie with interviews from well-known filmmakers.  Check out my thoughts on A Book About a Film.  I suggest checking it out regardless of whether or not you've seen The Cornfield People.  It's available Kindle (not recommended) and paperback at Amazon, while hardcover copies can be purchase through Schultz's website by request.