In an ant colony in Central Park, a neurotic ant Z-4195 (voiced by Woody Allen, which goes without saying is perfect casting), or "Z" for short, attempts to steal the heart of Princess Bala (Sharon Stone) while also freeing himself from an oppressive culture. Looking beneath surface, this film can be seen as an interesting and safe take on collectivism-versus-individualism. Some of the ants' faces share similarities to the actors who voiced them. Casual swearing—rare for many animated films at the time—earned this outing a PG-rating, along with some intense action; though, for the most part, it's probably fine for all ages.

Posted by Unknown at 9:20 PM No comments:

When beautiful clumsy heiress Kelley goes missing and all attempts to find her have failed, psychologist Shearer convinces the wealthy father (Wanamaker) to hire an equally klutzy accountant Short to go down to the Mexican Riviera to find her. Glover, an experienced detective, accompanies and guides Short through the search, slowly losing his patience waiting for Shearer's theory of two cases of bad luck making a case good luck to come true. Lots of laughs, and Short and Glover make quite the humorous pair. Has such a great amount of charm, excitement and reply value, that suspending disbelief is very easy. The bee-sting scene is timeless.

Posted by Unknown at 9:18 PM No comments:

Charming and adventurous flick about concierge Fiennes teaming up with lobby boy Revolori to prove his innocence after being accused of murder. Both leads are terrific and director Anderson's unique filmmaking style has really found its place with the masses, earning a Golden Globe and even two Oscar nominations. The film gets up and running incredibly quickly, almost too fast for a movie that takes place in a book within a flashback and within a second flashback—Anderson uses three different aspect ratios to inform viewers of where we are in the timeline. At 100 minutes, it feels like the cast and crew downed several quad-venti's and got to filming; seriously, the movie may have actually been better with a little fat, maybe an extra 20 or 30 minutes just so the audience can absorb what's going on. Don't mean to pry too much, as it is indeed an overall lovely picture.

In near-future L.A., Theodore Twombly (Joaquin Phoenix) starts a relationship with Samantha (Scarlett Johansson), who is smart, funny, adventurous… and a computer. Has its moments, but is an overall pretentious outing despite some of its good points on love and emotions in a world that has an ever-growing connection to technology. The overall downfall is Phoenix as a very awkward man in a very unusual relationship—this may have been the intention in order to establish the believability of someone who would fall in love with an operating system, but it ultimately distances the audience even further from the reality that it attempts to build. Worthy soundtrack though.

Older Hitchcock film about tourist Lockwood discovering that an elderly traveling companion (Whitty) has mysteriously disappeared off the train they're riding in, with the majority of the other passengers denying that the old lady even existed, only to unravel a sinister scheme. Cricket enthusiasts Charter and Caldicott (Wayne and Radford) are the peak of the movie, and proved to be so popular at the time that they were featured in three other films. But for its era, THE LADY VANISHES is a somewhat underwhelming thriller in terms of a satisfactory conclusion. There are a couple of instances of odd fade-ins and fade-outs, plus some seemingly overelaborate development in the first act at the "Gasthof Petrus" inn in the fictitious country of Bandrika. Based on the 1936 novel The Wheel Spins by Ethel Lina White.

Posted by Unknown at 6:02 PM No comments:

Angry lover Diaz and betrayed wife Mann recruit current mistress Upton to help them exact revenge on shameless player Coaster-Waldau. The significant others who are dragged to this outing will be pleasantly surprised at the genuine laughs that are offered. Try as she might, Diaz continues to be greatly limited in her cutesy-comedy performance, not unlike THE HOLIDAY; and although nobody else in particular is "bad" per se, it is definitely Coaster-Waldau who carries this picture the extra mile. Crude at times, and while there's not usually anything wrong with crudeness, one can't help but wonder if this movie's use of it is just to compensate for its many other imperfections.

After accidentally killing an opponent in the ring, Sean Thornton (John Wayne), an Irish-born American heavyweight, hangs up the gloves and vows to never fight again. In an attempt to bury the past, he starts anew by going back to Ireland to reclaim his family farm, falling in love with Mary Kate Danaher (Maureen O'Hara); however, after they marry, her brother Squire "Red" Will Danaher (Victor McLaglen) refuses to give her her dowry, leaving Thornton conflicted between staying out of trouble while failing to defend his wife or doing his part in righting a wrong while likely having to use his fists to end the feud. If you enjoy lush scenery that director John Ford and Winton Hoch are excellent at capturing, then this is by all means a must see for you. Also known for its comedic showdown brawl at the end. Not much else going for it though, and John Wayne is John Wayne. 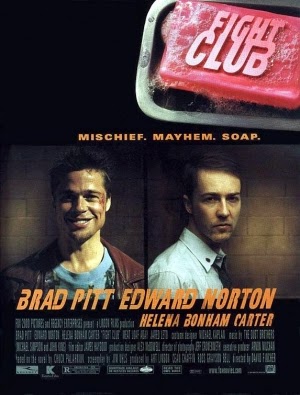 On a quest to fill an emptiness that causes him insomnia and compulsive buying, Norton turns to support groups that have nothing to do with his own conditions just so that he can feel balanced, but when fellow impostor Bonham Carter starts lurking around, he must turn to other outlets. This is how he meets Tyler Durden (Pitt). Unconventional plot faithfully adapted from Palahniuk's debut novel of the same name with an equally unique "mind's eye view" storytelling approach from Fincher, this brutal flick will surely grow on the male viewers, while also making you second guess the world in which we live in. Unexpectedly groundbreaking, and rightfully considered a classic despite its ability to be misinterpreted.

Email ThisBlogThis!Share to TwitterShare to FacebookShare to Pinterest
Labels: ****

Johnny Utah (Reeves) is an ambitious young federal agent who must go undercover as a surfer to infiltrate slick bank robbers known as the Ex-Presidents. While undercover, he befriends Petty and Swayze, both of whom know the local surfing scene and might be able to help network him to the robbers, but this becomes a conflict in and of itself when he falls in love with the former and establishes a fond respect for the latter, neither of which will approve his true identity of being a fed. Reeves and Busey cause so much destruction trying to catch the bad guys, yet we never see them filling out reports or any other paperwork. According to this movie, people can have conversations while skydiving! Hmm. Despite the constant suspension of disbelief required to actually buy into the movie's nonsense, POINT BREAK has an undeniable charm that make you allow (and even embrace) the obvious imperfections. Maybe it's the chemistry of the cast; maybe it's the fact that it's a non-stop roller-coaster ride; maybe it's the sunny-beach action-packed vibe that gives off this unique mixture of relaxation and testosterone. Whatever it is, it works.

Crotch… I mean, Crap… uh, Crawl (Shore) is a dorm residential adviser at the University of Los Angeles who turns South Dakota farm girl Becca Warner (Gugino) upside-down, showing her how to cut loose and be herself. In return, Becca invites the lonely Crawl (who has lots of friends but no family) back to her home for Thanksgiving with her family. However, Crawl adapts more easily to small town life than the farmland community can adapt to him. Hands down hilarious no matter how many times you watch it, and the rural setting allows the film to date incredibly well. The entire cast fits their roles perfectly, especially Paulie Shore, who couldn't be a more hilarious outcast of the Midwest!

Posted by Unknown at 1:56 PM No comments:

This adaptation by Brothers Weitz of the Nick Horny novel of the same name is a very refreshing comedy-drama that successfully uses a double voice-over narration, one of a man who hasn't quite grown up (Grant) and the other of a boy who has to grow up too quickly (Hoult). Toni Collette received several nominations for her supporting role, but the substance of her character is not quite apparent; while Rachel Weisz's subplot comes together and undone a little too easily. If this film were set during 1993–1994 like it was in the book, the overall story would have had more significance. Still, while a little too modern for its own good, ABOUT A BOY is undeniably entertaining (and even, ugh, a little cute) and without a doubt worth remembering.

Posted by Unknown at 1:54 PM No comments:

JCVD plays Frank Dux, a U.S. Army Captain who goes AWOL to compete in the Kumite—an illegal and deadly full-contact martial arts tournament held once every five years, to which only the world's best martial artists are invited—with his main motivation being to pay respect to his sickly mentor (Chiao) who took him under his wing. Burton and Whitaker (the only two to offer halfway decent acting) play CID officers on the hunt for Dux. Despite bad acting, disappointing choreography and endless clichés, none of the paper-thin characters are exceptionally unlikable (though this might be because they're so poorly developed) and the Hong Kong setting is captured so vividly. Based on unconfirmed claims by the real-life Dux.

Posted by Unknown at 6:27 PM No comments:

Email ThisBlogThis!Share to TwitterShare to FacebookShare to Pinterest
Labels: *½

Captivated the Trials of Pamela Smart

Jeremiah Zagar's HBO documentary tells the story of the high-profile New Hampshire trial and conviction of Pamela Smart, the accused murderer of Gregg Smart (her husband) in 1990. The film is packed with interviews—which includes: Smart herself, family, friends, accused conspirators, authors, reporters, and others—and does a pretty good job of letting the viewer choose who to believe. Right from the get-go, the film's main interest is how the notorious media coverage may have interfered with Smart's right to a fair trial, and Zagar not only never lets up but actually keeps pushing the issue harder and harder as the film progresses, making itself as sensationalistic as the subjects it's criticizing. Still, very intriguing and quite education for those who were not around or do not remember the hype of it all in the early-'90s.

Posted by Unknown at 6:25 PM No comments:

San Diego and the 1970s are a thing of the past. The 1980s and New York is here. After a nasty separation from Veronica Corningstone (Applegate) which involves her getting a promotion and him losing his job, Ron Burgundy (Ferrell) reforms his old crew of Brick Tamland (Carell), Brian Fantana (Rudd) and Champ Kind (Koechner) for a gig at a 24-hour news channel. Yes, there are laughs; and yes, a third installment would be worth making; but ultimately, ANCHORMAN 2 suffers from similar flaws as an AUSTIN POWERS sequel, where they try to go one step further than the original but end up going one step back—all with far less replay value than the predecessor.

Posted by Unknown at 6:22 PM No comments: