This Is Where I Leave You

Four grown siblings (Bateman, Driver, Fey and Stoll) are forced by their blunt mother (Fonda) to fulfill their recently deceased father's wish… sitting shiva, which would require them to be under the roof of their childhood home for an entire week while people come to express their condolences. This results in the five of them confronting things they've been hiding from each other and themselves. Ultimately delivers the hilarious consequences the cast of its caliber is expected to deliver; however, there is a healthy amount of drama that is worked into the plot also. Worth the ticket price and the hour-forty-five minutes, but the resolution too easily justifies the avoidable imperfections of the characters we're supposedly rooting for.

Posted by Unknown at 5:57 PM No comments: 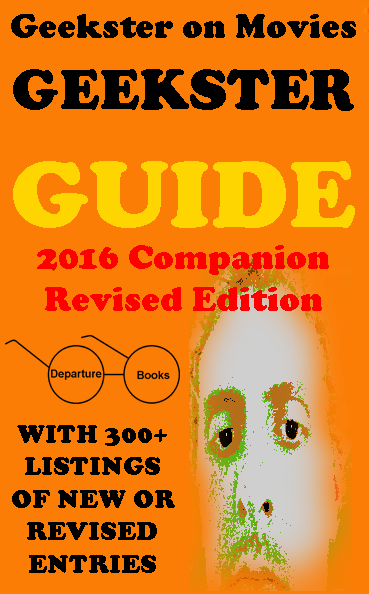 The 2016 Companion Edition of Geekster Guide will be available at Amazon and other fine booksellers.  To keep your beaks wet, check out this .pdf.
Posted by Unknown at 6:19 PM No comments:

Most actors try their best with every role they take on, but then there's that rare opportunity that requires a physical transformation into the character, and Matthew McConaughey and Jared Leto take on the challenge by taking off nearly 80 pounds between the two of them. The former plays a homophobic rodeo cowboy and electrician, the latter plays a transgender drug-addict; together, they set their differences aside to build and operate an underground pharmaceutical market to treat others livings with AIDS just like them. McConaughey and Leto rightfully took home Oscars for their performances. Garner, O'Hare and Zahn work out nicely in supporting roles. Also won Best Makeup & Hairstyling, and nominated for Best Picture, Best Original Screenplay and Best Editing.

Email ThisBlogThis!Share to TwitterShare to FacebookShare to Pinterest
Labels: ***½

From Dusk Till Dawn

A father (Keitel) and his children (Lewis and Liu) are kidnapped by the dangerous Gecko brothers (Clooney and Tarantino) who are dangerously desperate to get past the Mexican border to start anew, but when they seek refuge at the Titty Twister (an isolated strip club and brothel), the criminals and hostages must work together if they want to survive the bloodsucking staff. Suffers from the FULL METAL JACKET-effect, where the first act easily tops the remaining two acts after taking a major turn in events to leave the audience feeling like they're watching an entirely different movie. Tarantino is never at his fullest potential when partnered with the skin-deep action-driven talents of Rodriguez. SFX absolutely amazing for 1996, though; and a fun picture to revisit every seven or eight years. First appearance of Earl McGraw (Michael Parks).

Posted by Unknown at 9:24 PM No comments:

Remake of the 1987 favorite, about a critically injured police officer, whose only chance of survival is to become a part-man/part-robot being that is used to uphold the law. It's easy to nip at the movie for being for more tame in terms of violence (considering the original's R-rating), but it wasn't for a lack of trying by director Padilha and star Kinnaman—and the remake actually seems far more action-packed despite the lack of bloodshed. Another plus are themes of consciousness/mind and free will, which is worked in very fittingly. Keaton and Oldman are excellent, and the film is even further heightened by many homages to the original, especially with snippets of Basil Poledouris' 1987 score. While Jackson is also a pleasure as Novak, a television host and supporter of RoboCop, the film's major downfall is the out-of-place humor in the first and last scenes of the film—the latter of which is followed by The Clash's "I Fought the Law", which is just too distractingly strange to let it go unmentioned.

Posted by Unknown at 8:11 PM No comments: